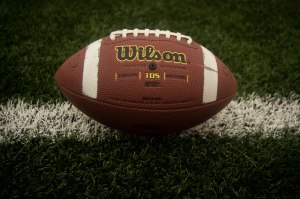 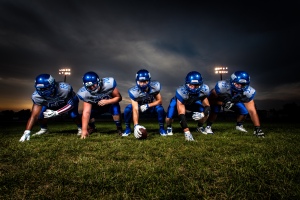 It’s the most wonderful time of the year. Football season is upon us!

I’ve had a longstanding love affair with the game of football. You can blame my dad and nearly all the males and most of the females, on that side of my family. But . . . my dad is a high school football coach which means it’s kind of in my blood.

Growing up, my dad coached high school and college football {and now coaches high school again}. We were a football watching family – on my dad’s side. UCLA on Saturday’s, the Rams for professional football, and Friday nights during the high school season were all dedicated to the game.

But being a coach’s kid is more than just the season itself. It’s a year-round deal, though things kick up in the summer. When we were young, my grandparents lived within walking distance to Anaheim High School, where my dad coached. We would walk down from their house if he was already there. Occasionally, my Grandpa fed the players.

One time, he made a huge amount of his ridiculously spicy burritos. Everyone who was in the house that day wrapped burritos – for the whole team. We received our instructions on wrapping properly and went to it. No wonder I love feeding my Marines. 😉

When my dad would take a break {probably because we whined so much} we would play “tennis” on the tennis courts or swim in the pool {which has sadly been closed since 2007}. Matt & I wandered all over that school. We played, fought, and made up games. And at least for me, I fell in love with football and Anaheim High School, in particular.

Matt and I would eat super nutritious snacks {I’m sure my mom was thrilled with all the junk food we ate on those visits.} in the gym – Corn Nuts and Coke. I’m convinced I was prepared for working around a few hundred Marines from those early days in that loud, smelly gym, with . . . interesting language. These are among my fondest memories from childhood.

Anaheim High School was not only where my parents {and aunts & uncles} attended high school, but it’s also an old school {established in 1898} with a lot of pride. Our home games were played at Glover Stadium in Anaheim. 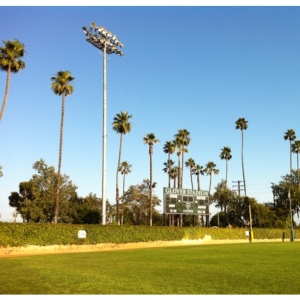 Those Friday nights, under the bright lights, will stay with me forever. We had some good Friday nights. And we had some not so good nights. When we won, I was elated and couldn’t sleep afterwards {good thing my Grandma let me stay up and watch TV with her}.

If we lost, there was no doubt about it . . . I was mad! During the playoffs one year, as the rain poured down on us {that never happened} and the Set Free bikers {don’t Google them…haha} prayed that our guys would pull out a win {literally on the microphone praying}, we lost. And it SUCKED. I’ll never forget that feeling. I was devastated – as if I’d played myself. 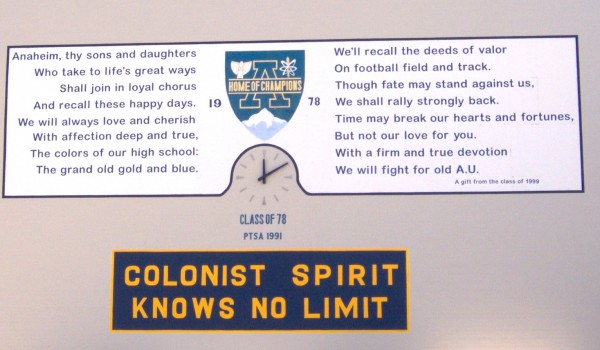 Football is not just a game. It’s a culture, it’s my childhood, it’s the cooling air of a SoCal fall, with Santa Ana winds sometimes blowing, the band playing, my Grandpa heckling the referees, the familiar voice of the announcers, and singing the Alma Mater at the end of the game. Football was as much a part of my life as anything else.

As an adult, football has changed a bit for me. I don’t find myself in the stands on Friday nights. But if you mess with my Panthers, I’ll take you out {Do not tempt me. Haha.}. But one thing that remains is the love for a game that is tied to nearly every good memory of those years with my dad.

Last year was a terrible season for the Panthers. So as the hangover from the crappy season wore off, it became clear that my team was getting back a little of the joy and fun they have playing this game. When they’re at their peak {team spirit wise} they remind me of all of the best things about football.

As the season has grown closer, I’ve gotten more and more excited. And bonus . . . I think my team has their heart back. This year feels like it could be a good one. 🙂 But even if it’s not, I’m still ridiculously excited.

Every year at this time, I start reminiscing about those early years of growing up with a coaching dad. And sometimes, when I’m standing in a room full of young Marines and I wonder how I’m not shocked by something they say or do {haha} it’s probably because I received enough training when I was eight, surrounded by a bunch of big dudes acting like it was no thing at all. 😉

This surely isn’t the best post I’ve ever written. There’s more I’d like to say – so much more. But I’ll leave it at this . . . my childhood would be drastically different without this game. It is one of my favorite parts of my elementary – junior high years.